Rain.  That was the forecast.

A week prior to this event, I have been checking my  iPhone to see if the weather will improve.  The opposite was true.  As the day got closer, the chance of rain is no longer a chance.  It was definite.

But I could not back out now.  After all I posted in Facebook that "rain or shine, thunder and lightning or even end of the world" I will be joining this ride.

This is my first time to join a ride starting from Richmond, so I allowed myself plenty to time to cycle there from my home. I wanted to arrive relaxed and not in a rush. I was 45 minutes early.   Few minutes have passed and there were no Bromptons around.  I was beginning to think I was in a wrong place.  Could there be another Whole Food Market in Richmond?, our meeting place. 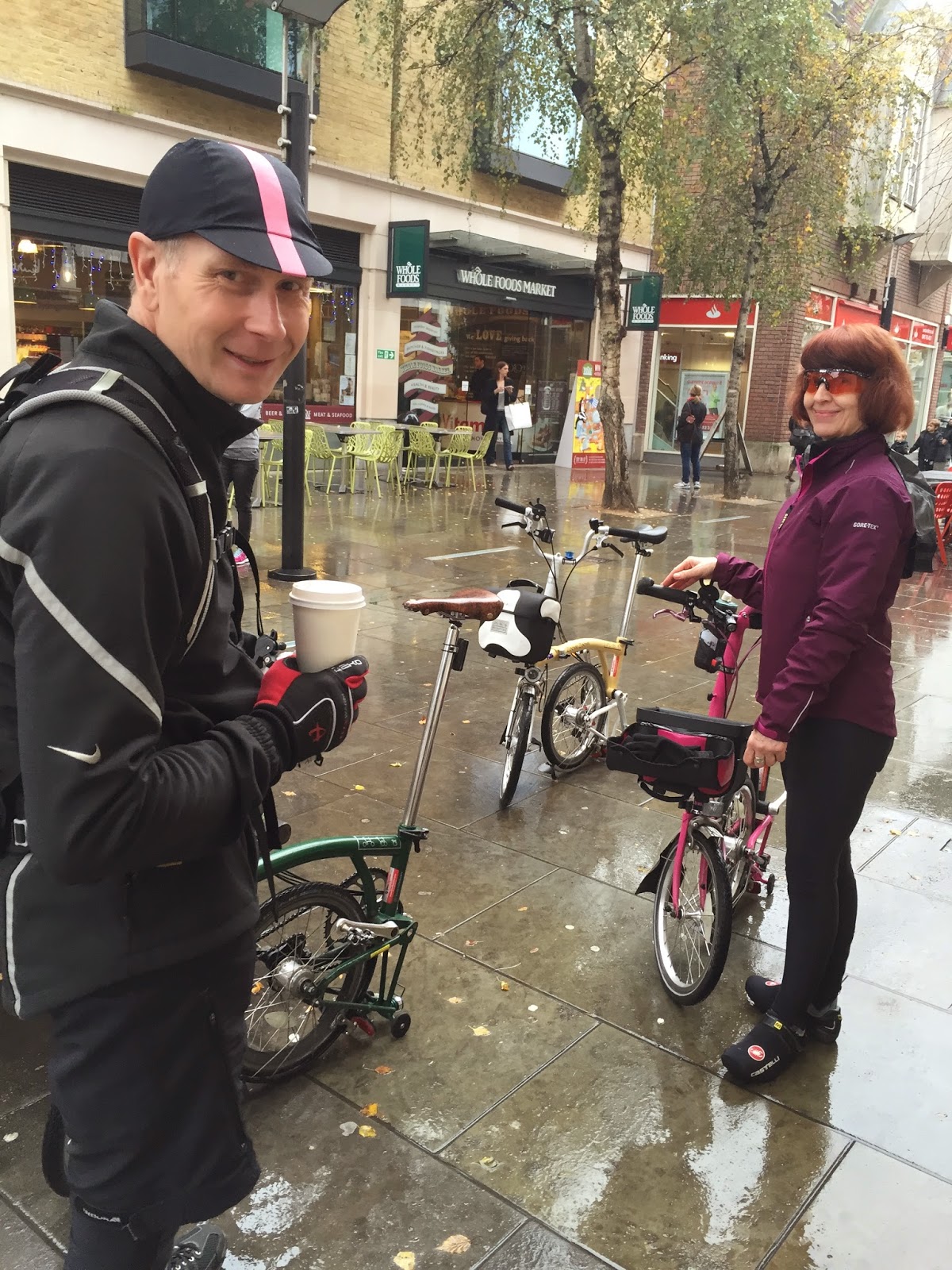 Few minutes to 10.30 Anne and David, the host, arrived. Because it was a wet and gray sky, and because it was only me who turned up,  I was expecting David to say that we will just have few rounds in Richmond Park and then call it a day.  Which would be fine by me.  I was ready for anything that will happen that day.  I understand that they had a big ride last night and I don't want them to go ahead with the ride just because of me.

But no.  He was soon telling me and Anne that we will be completing the loop in about 4 hours and that we will be cycling along the Nightingale Lane which he added is interesting as it is a bit of an incline. 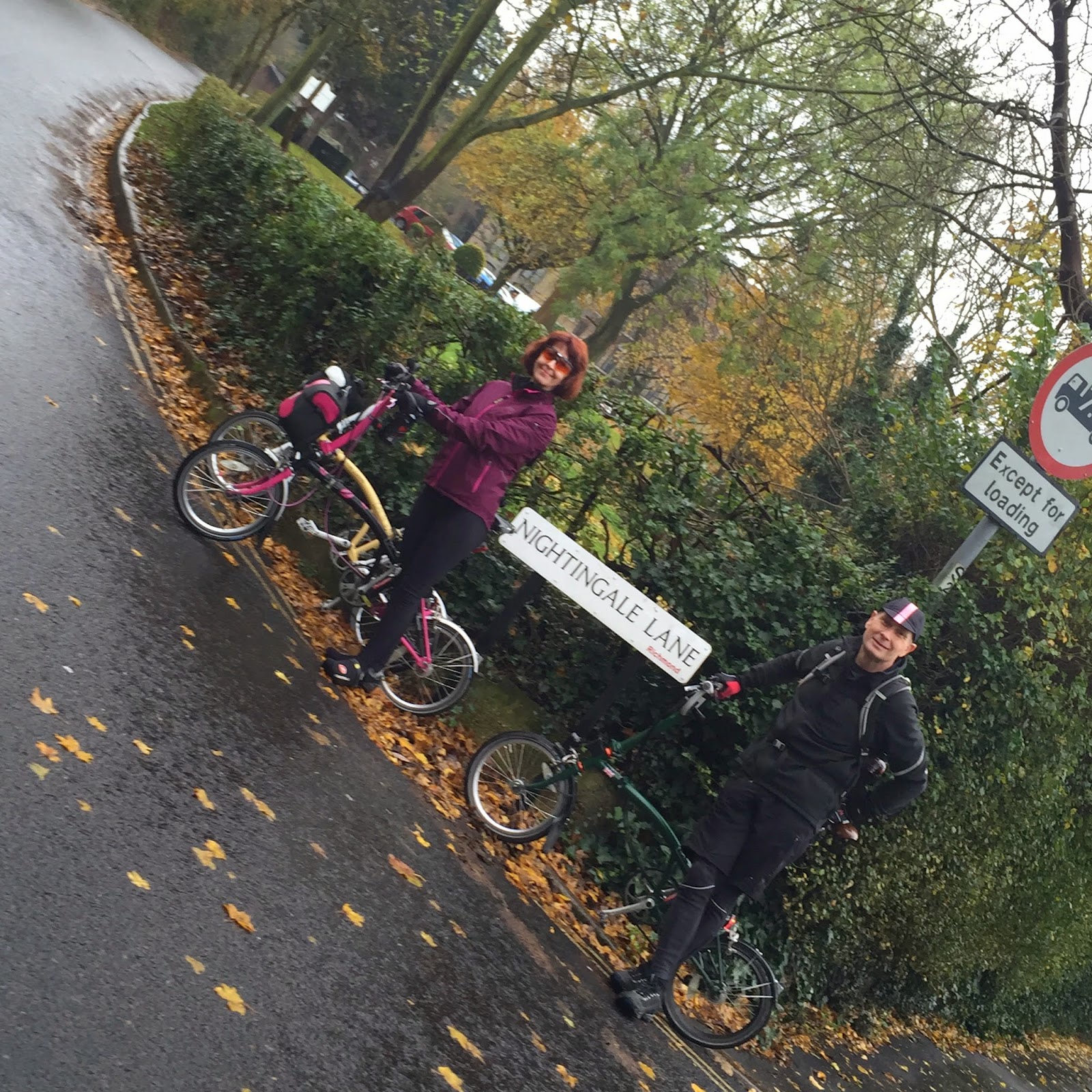 We waited for few more minutes just in case others would turn up.  Off we went and very soon we were in Nightingale Lane.  I am convinced this Lane is wrongly named.  Nightingale connotes something like caring, smooth and helpful.  This Lane I recon should be named Murdering Lane or perhaps Heartbreak Lane.  Because by the time you get to the top you would have suffered a cardiac arrest.  Yes heart failure.  This Lane looks okay from the bottom but as it turns mid way to the left, to me it looks vertical.  The shortest way to heaven ( or more suitably hell). All it needed is a rope and it would be a perfect mountain climbing site.

But it was fun.  I wont tell you how I got to the top, but I got there.  I kept blaming Zoomzoom for not giving me enough gears but Zoomzoom is telling me that I need more legs strength not gear. London is relatively flat and to have a lane this steep is a novelty.

We proceeded to Richmond Park.  It is everyone's favorite.  I could cycle here every day and I will never get tired of it.  It is beautiful anytime of the year. We exited at Roehampton Gate and from there David's navigation skill took over.   Map. 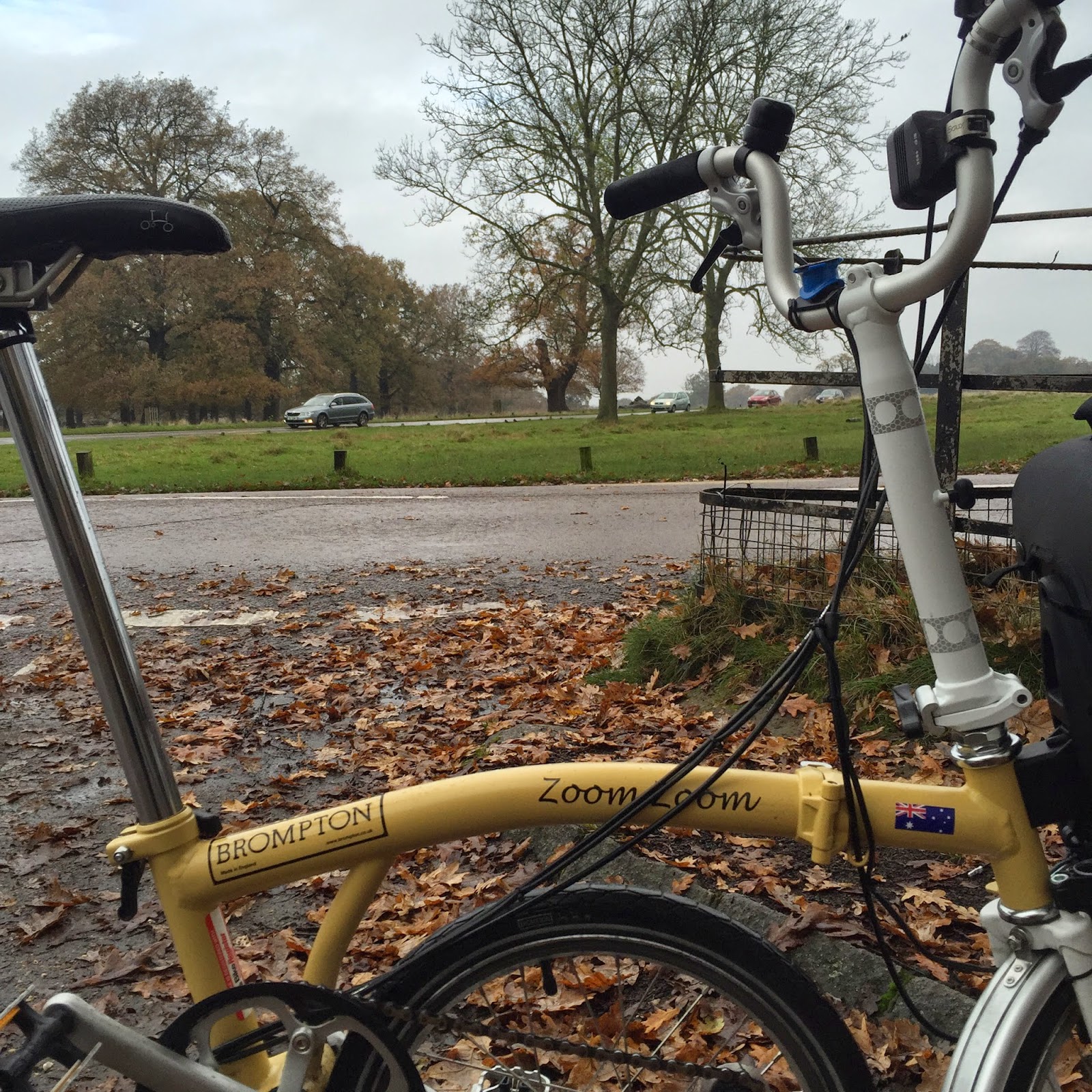 Our next stop was Wimbledon Windmill.  I am embarrass to admit that I don't know anything about this historic Windmill.  I am not a avid reader and I am short if not totally lacking in general knowledge.  This is one thing that impresses me about London, or UK or Europe in General.  You can basically touch the history.  And London Brompton Club (LBC) rides give me these opportunities. 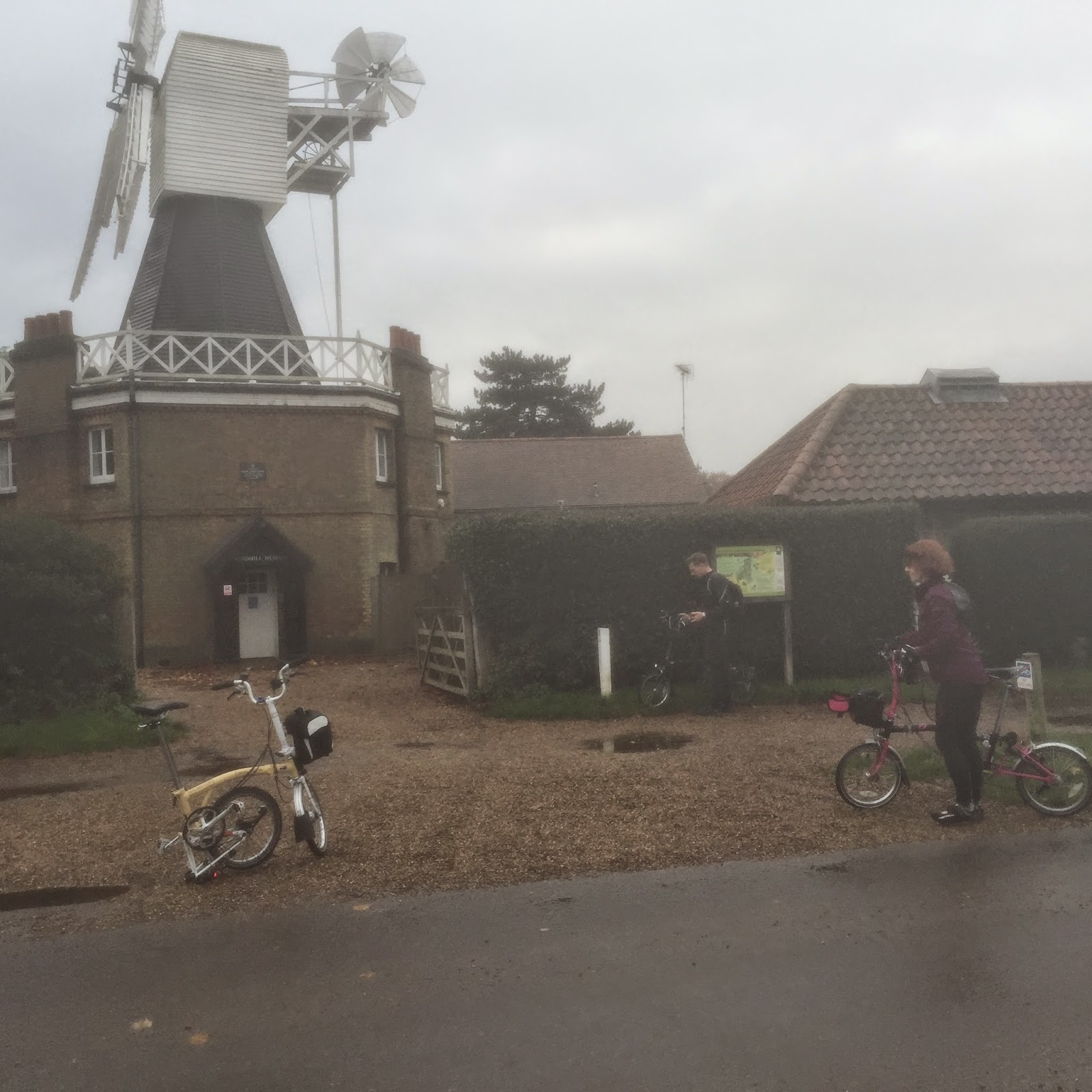 We were back on our pedals again.  We passed by so many interesting places, park, open spaces, football/cricket grounds,  open fields, row of apartments , expensive houses, retail areas and on and on.  I recognised the high street of Wimbledon.  I have been here before because this is where I converted my drivers license into UK drivers license.  I believed the licensing office has since closed and that transactions are  now done online only. There is also Evans Cycle shop here where I preferred to go, rather the one close to my home because the shop here in Wimbledon has parking.

We stopped for lunch at Katavento Brazilian Restaurant at Merton Abbey Mill. Lunch break is one of my favorite time of the ride.  Yes for food and drink and rest and chat.  It also gives me the time to soak in the wonderful sights and atmosphere from the hours of riding just passed.  I ordered pastel and guava juice.  It was a delight. 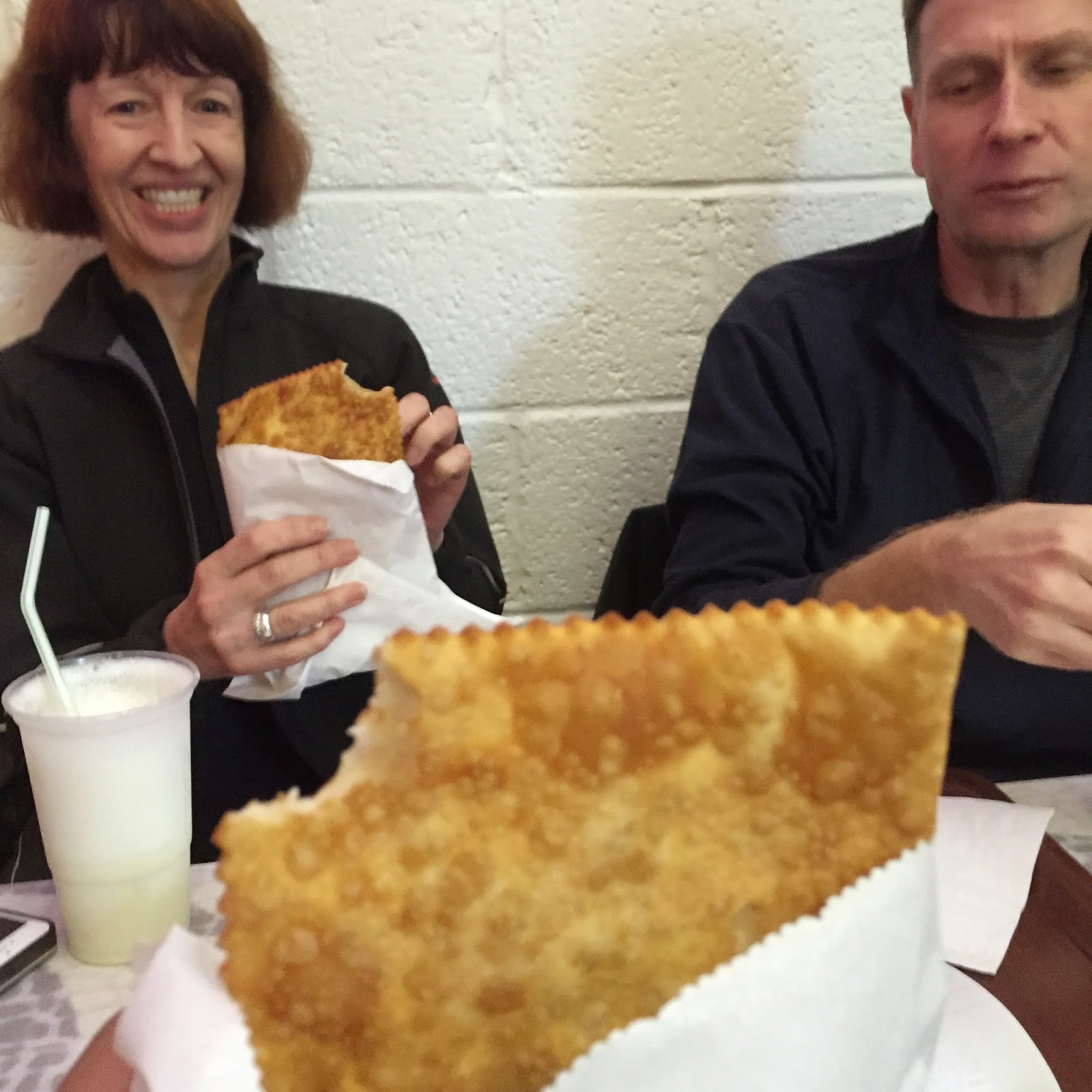 I also had a rare chance of chatting with Anne and David.  They are stuck with me so they have no choice but to chat with me.  We talked about the previous night ride and night rides to the coast. They shared with me many of their riding experiences. We chatted about the beautiful people of LBC and many things Brompton. 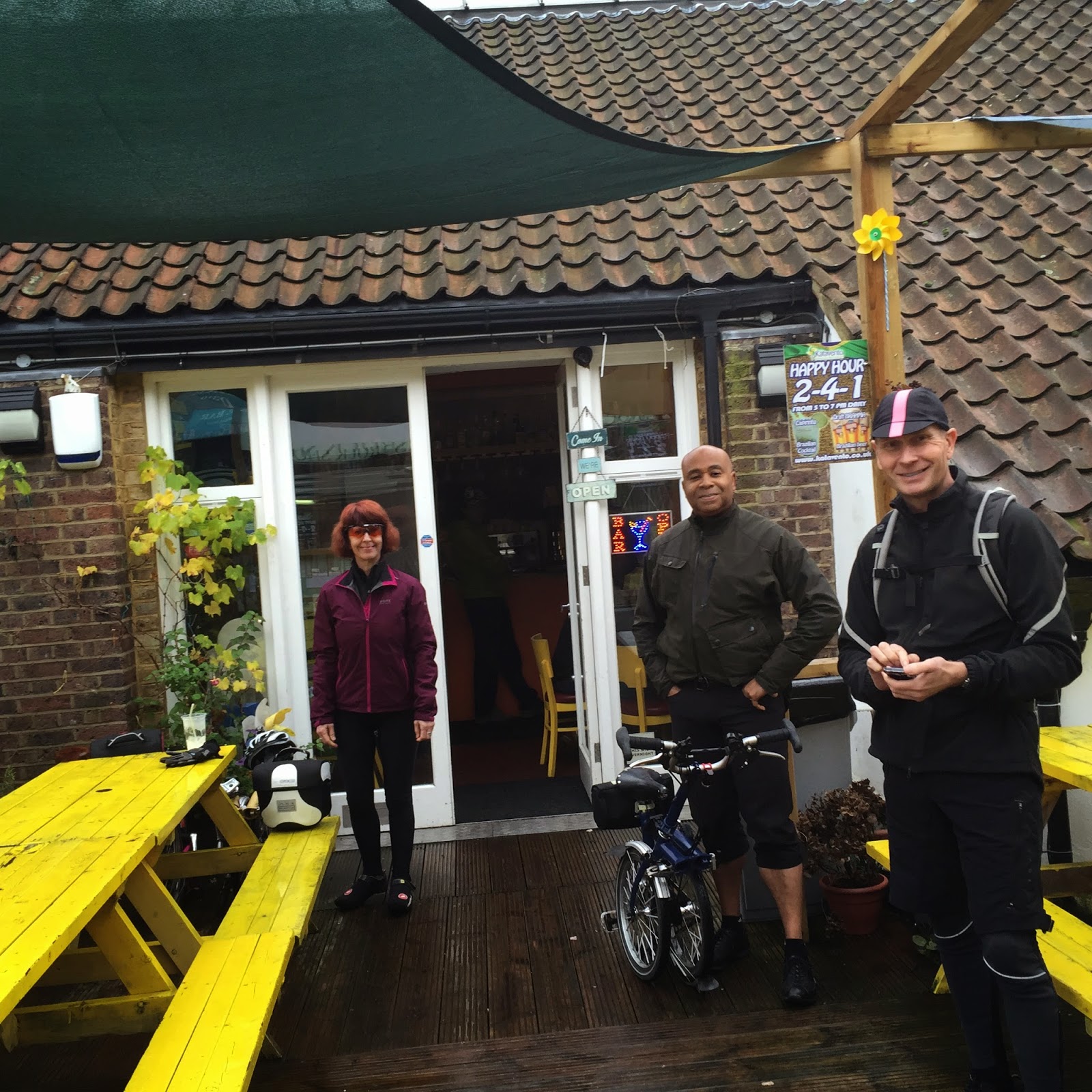 I like Anne and David. Not because they help me fix my saddle which kept slipping down, but because they are nice real people. Anne gave me a tip on how to ride on wet road.  She told me to avoid those manhole cover, the metal bits and avoid the white lines as they are more slippery when wet.

Shortly after we finished our pastel and juice, Floyd Stuart, another LBC celebrity joined for the second half of the ride.

We zoomed passed many interesting streets and parks.  We cycle along the river Thames.  It is just magic.  London is so beautiful even when it is cloudy and wet.  I felt like I was reading a beautiful fiction book of which I could not stop turning the pages because I am enjoying the read. But this is real.  I would not want to stop pedaling because I am enjoying every minute and every turn of the ride. Forget about taking picture because I am over the  moon and I would not let any interruptions. 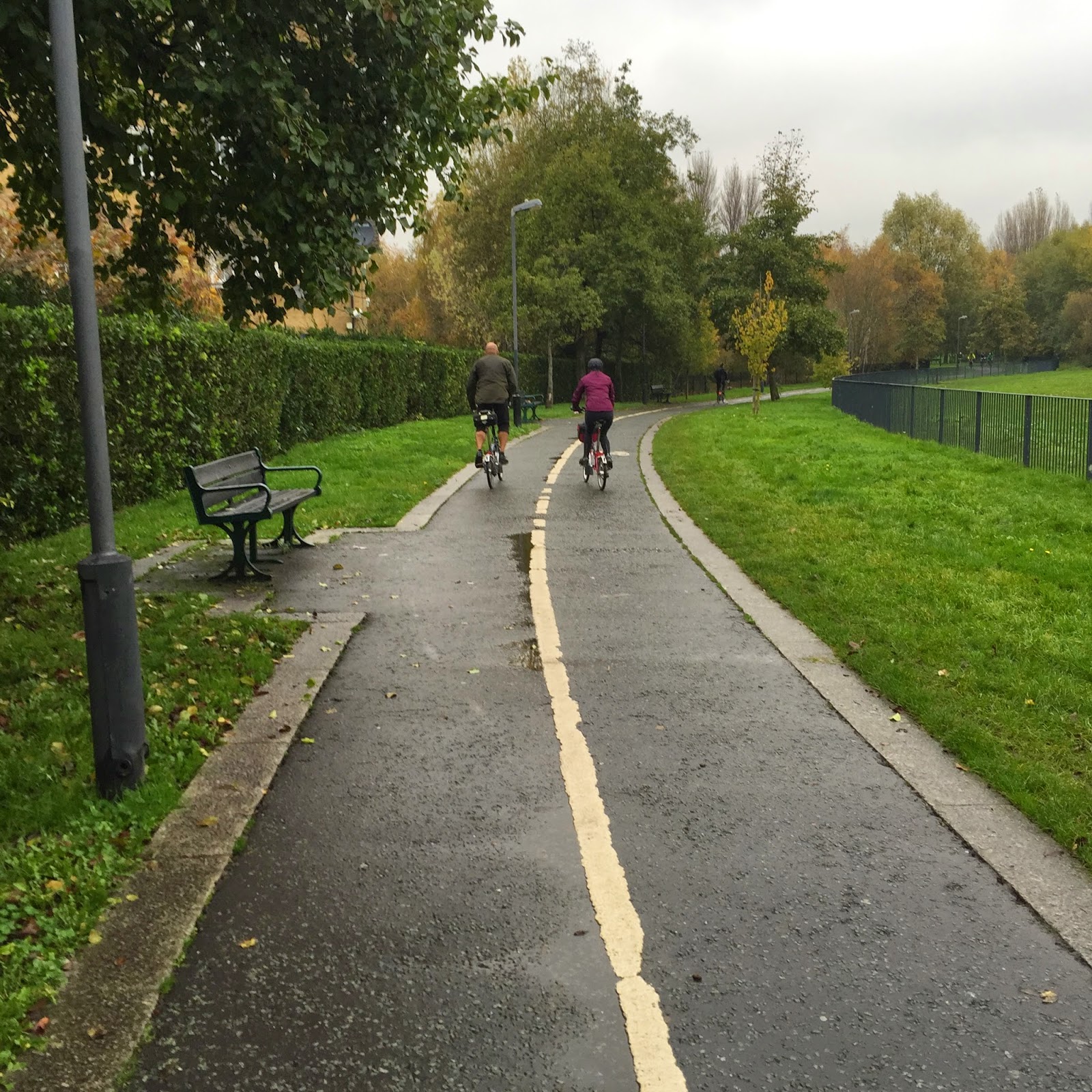 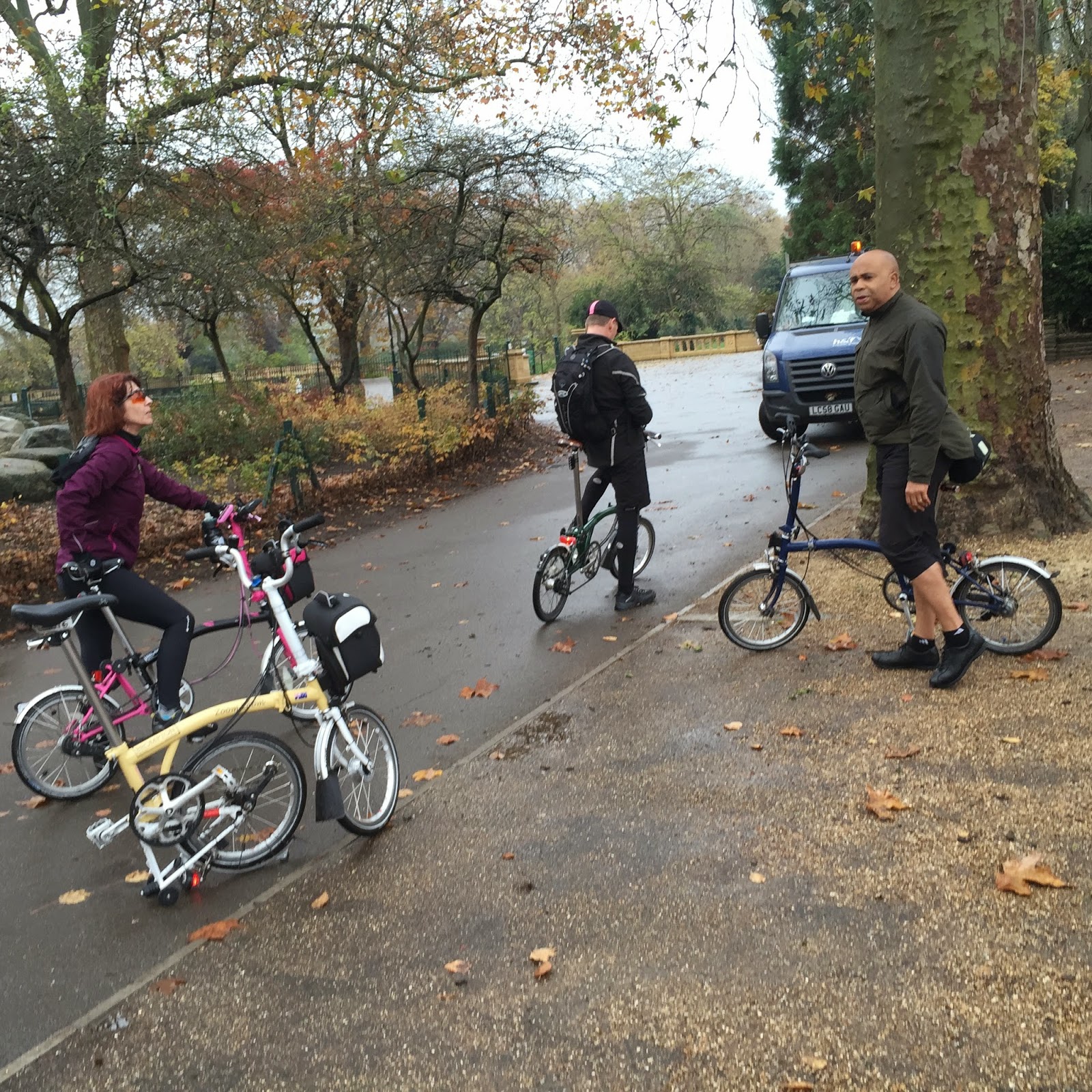 I never wanted it to end but soon we completed the loop and reached Richmond.

What a day it was.  What a ride.  What an experience.  The best company.  A big big big thank you to Anne and David and Floyd.  It was a small group but a big, very big beautiful day and memories for me. 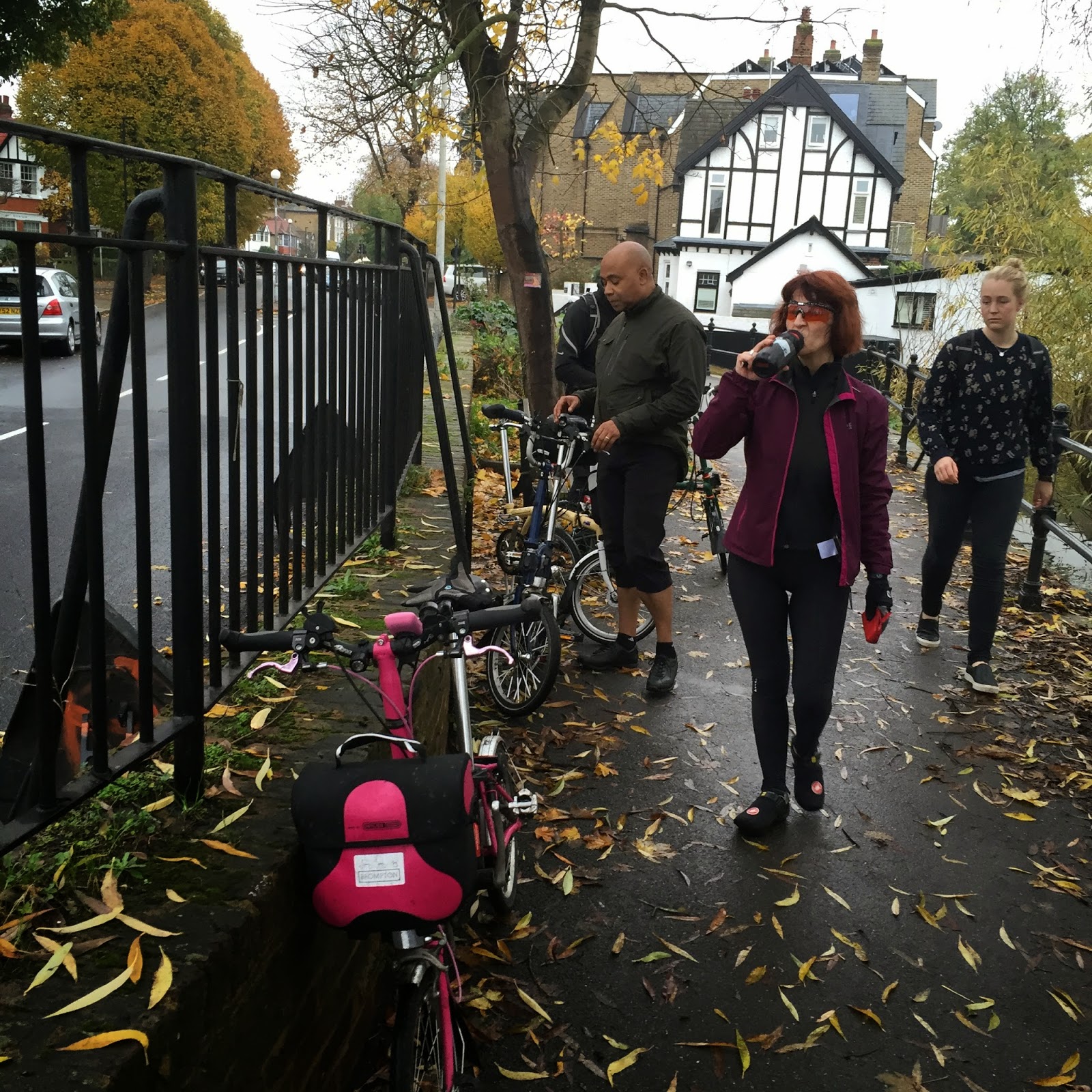 Posted by Zoomzoom Brompton at 09:04