Riding a Brompton in Brighton

It is a must that I reach Clapham Junction ( train station) to be able to join the Saturday London Brompton Club ( LBC ) ride to Brighton.  And I did it.  In fact I had plenty of time to wait for the 9.13 train to Brighton.  Shortly while waiting on the platform, the superstars of LBC Anne Marshall and David Parkinson appeared followed by Tom then Sam.  At Brighton Station we were joined by other big names Mr Orange Brompton and Samantha Skye. Not long the ever popular and well loved Oscar Ortiga* arrived in stunning fashion. 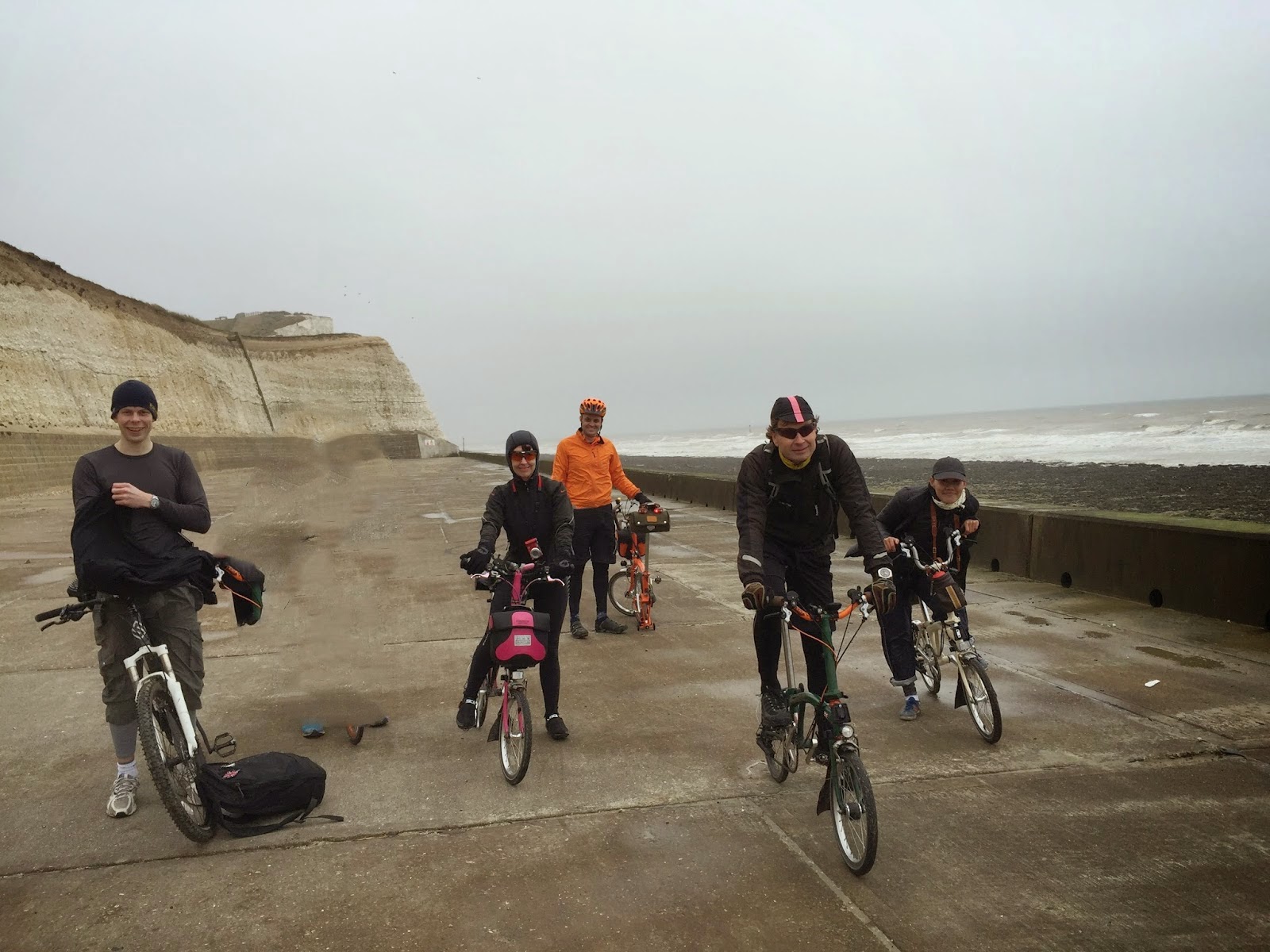 Yes, we were stunned because Oscar brought his Tern Bike.  He was apologetic mentioning that his Brompton is having a major makeover.  But despite that we abused him to death.  He received verbal abuse far worst than that of the BBC producer of Top Gear.  But Oscar being Oscar just brushed it all off and we all went our merry way.  His penalty though was that he become the photographer of the day and my word, he produced some stunning and memorable photos.  Thanks Oscar. 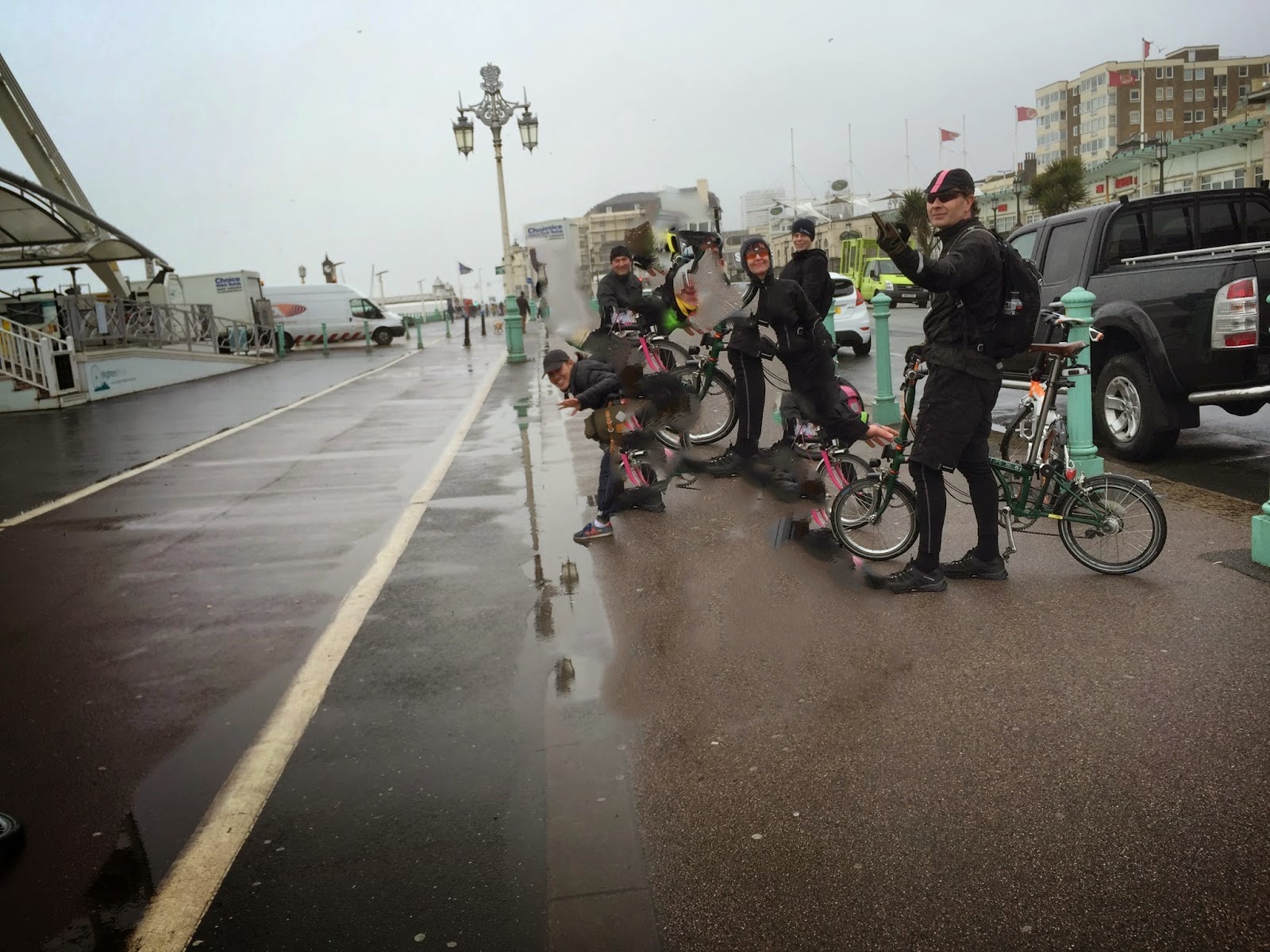 I also had the chance to have a chat with Tom Strottman and I am privileged to mention him here.  He is a nice chap full of life.  Zoom zoom instantly like him.  He like him for his camera and his shorts. He has this Nikon camera that features a wide lens.  I recon it is as wide as my face.  The lens zoom in and out and protrudes straight out effortlessly like a third hand.

He was wearing  a wonderful shorts, which looks as comfortable and as soft as a nighties but with a superior Lycra quality every evident.  No, it was not a see-thru. Don't get too excited.  It is more of shades of black rather than shades of gray.  It hangs beautiful around his waist.  It is MT500 by Endura.  He looked stunning with a matching Vulpine softshell top.  And with his new black and basil green brompton he looked superb.


With Mr Orange Brompton and Tom Strottman the standard for Brompton cycling fashion has really gone sky high.  Can you imagine me standing beside them? I look like a dagg.  ( definiton of dagg)

I was also pleased to see Sam Parkinson again, son of David and as good looking and taller.  I like it when Sam is around because he injects a bit of youthful element to the group.  With me being the oldest in the group, Sam brings down the average age to about 28 and a half years.

After a briefing, our host David Parkinson lead us to a narrow street that is sloping down just few meters away from the entrance of Brighton Station.  This means our first 2 minutes of cycling is a free fall.  I felt I needed a parachute to take me down that lane.  I though this is going to be a great ride.  A free fall start with the beautiful people of LBC, what else could I ask for.

We zoom zoomed along the streets of Brighton like possessed rats freed from a cage, then suddenly we stopped in a corner.  David announced this was the start of the famous Bear Road.  I looked and it is a road that is straight and it goes up and up and up.  Everyone was so excited and started pedaling uphill, merrily chatting away as if they are cycling in the park.

However silently Zoom Zoom and I started the usual blame game.  I was blaming him for not giving me enough gear but he was blaming me for not having enough leg power. After only about 20 meters of the 1.6 km, Zoom Zoom and I started in chorus calling all the saints and gods for help in the ascend.  No help was forth coming so I can only assume heaven is not above.  I am convinced that in cycling heaven is below and hell is above.

At the top we detoured to a beautiful meadow.  It was a stunning scene.  The grass are green and moist and for a moment I thought we will be cycling straight down.  No. we cycled sideways which meant we cycled on the slope and it was a steep slope. I have never done this before and it was fantastic.  How I did not slide down the slope is nothing short of miracle.  This is the sort of thing that only a magician can do.  I made it down the valley unscathed.

We then proceeded down the beach - the famous Brighton beaches and on along the Undercliff. It was wonderful. The scene I can not describe.  It was so enjoyable and so easy  to ride because the gale force wind of seemingly 200 kph was behind us.  We did not even have to pedal.  We were just woozz away effortlessly.

As the wind became stronger, actually had it been with heavy rain I would call it a storm category 5, David broadcasted that it was time for lunch.  So we headed back and that was when real fun begun.  Samantha and I found ourselves at the back, way back of the peloton. The only reason I can think of was that the people in front are the large bodied ones, the fat ones, the heavy ones, those that can withstand the wind.  While the people at the back, me included, are the slim,lightweight and the beautiful bodied ones.  However when I learned that Anne and Sam Parkinson, the slimmest of the bunch, were at the front, my theory was shattered.

The wind was so strong that every time I pedal I find myself pushed back by the wind 3 meters behind. But it was fun. And that is one thing I like about the LBC rides.  The weather does not really matter.  Storm, wind, hail, snow, rain or shine, it is all fun.  Really, Brompton bikes bring out the child in you.

Lunch and coffee breaks are always a nice time during the LBC rides.  It gave us opportunity to chat and talk about all sort of things. Zoom zoom loves it. He is a perennial gossiper.  We were talking about my good friends and superstars of LBC James Houston and Jenny Chung when Mr Orange Brompton revealed something about himself and his best mate Andrew Barnett. He (Mr Orange Brompton) said and I quote "there is absolutely nothing going on between the two of us." 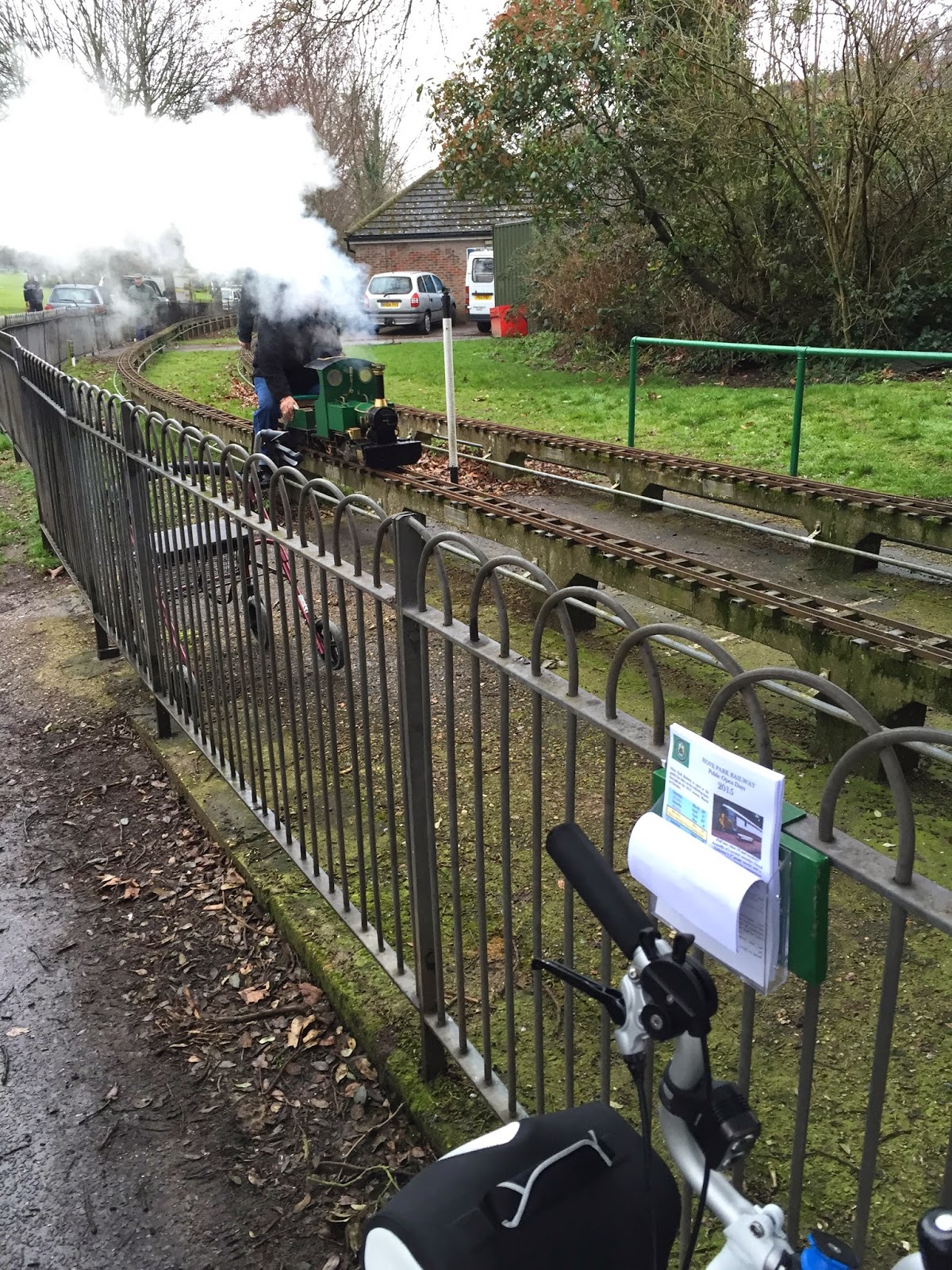 After lunch we cycled more towards Hove,an adjacent suburb of Brighton.  We reached Hove Park where we were pleasantly surprised to find a a miniature steam train run by local train enthusiasts.  But prior to reaching Hove Park we had two punctures in as many minutes.  How lucky can one be. 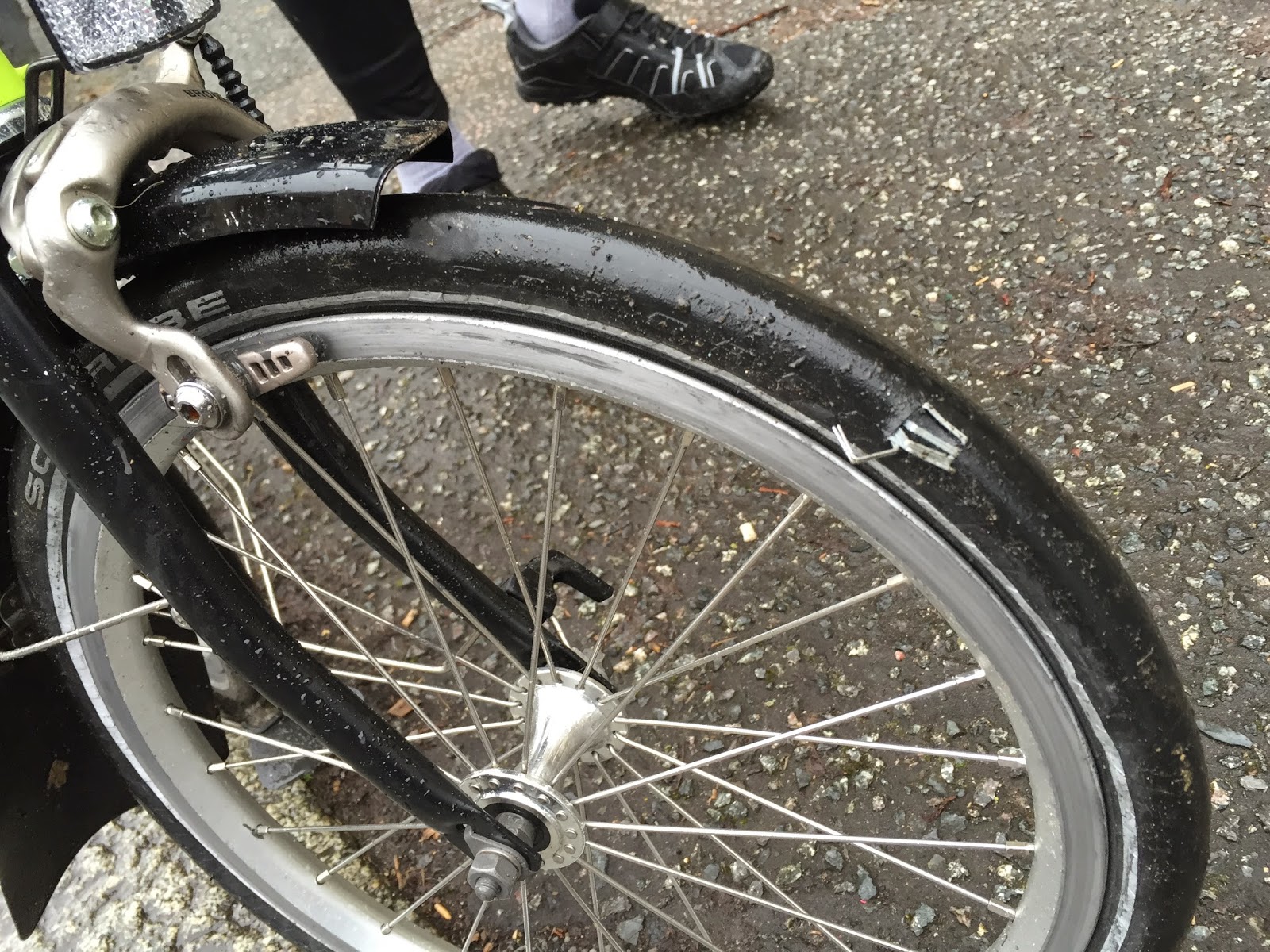 We stopped for coffee break in one of the cheap and cheerful coffee shop in the high street.  Coffee shops are a bit scary for me.  But I won't tell you why now.  But this coffee place is a wonderful one because they also serve Vietnamese meals.  I should have ordered a Vietnamese noodles which I have been missing for so long.

We all head back to Brighton Station to catch the 5.19 train to Clapham Junction where we said our goodbyes and thank you(s).

It was such a great day.  I thoroughly enjoyed it.  Despite the rain, the strong and cold wind, and the gray sky I had such a great fun.

Thank you Mr David.  I can never thank you enough for hosting such a great ride.  Really, I don't know how you keep coming up with such an interesting route, challenging terrain and beautiful sceneries.  Thank you everyone for the laugh, struggle on the hills and for your stimulating company.  Hope to see all again soon.

Yes, it is a must.  It is a must that I do this ride again if ever it gets repeated.

(Postscript 01 May 2015:  Oscar Ortiga is a fictitious name.  The real person asked me to remove his name and pictures.  No reason was given.)

Posted by Zoomzoom Brompton at 12:14 5 comments: