I read quite a few stories about bike rides that start at Midnight.  It is beyond my comprehension why anyone, not mentally challenged, would even contemplate the idea.

Wellington Arch at 23:45 , Friday 24 April 2015 was the rendezvous. I was excited and equally scared for I would have trouble finding where Wellington Arch is during the day, let alone during midnight. Then cycling 100 plus kilometers to Southend for about 8 hours,  I must be out of my mind and asking for torture.

I arrived at the meeting place with very minimum effort.  Thanks to Sleebus with whom I arranged to meet at the train station and to our pleasant surprise, David, our ride leader, and Anne were also there.  Together, the 4 of us cycled to meet the rest of the group.

I was expecting the area around the Wellington Arch at Hyde Park Corner to be quiet or even a bit eerie during the night and I was actually wondering why this was chosen as a meeting place.  But this particular night, it was ablaze with lights and sound as the place is being prepared for the early morning Anzac Day commemoration.  But even without these lights and sound, Wellington Arch is a fitting location for a start of a ride.  It is a beautiful place.


My consciousness was going into turbulent mode as I was thinking of so many things prior to this date. Can I do it.?  A hundred kilometers, 8 hours, midnight darkness, rain, cold wind, food, clothes, water, middle of nowhere, sleep deprived, punctures and getting back home are some of the words that played chaotically in my mind.

Soon as I said "hi" and "hello" to everyone and as soon as we started pedaling, all my worries disappeared, for I knew that I was in the company of good, fun and beautiful people of London Brompton Club (LBC). At the strike of midnight, we departed from the Arch, zooming along Constitution Hill, with the Buckingham Place on the right hand side, thru to The Mall, straight to The Strand and on towards east.

In less than a blink of an eye, we were at ExCel. We were like little guided missiles, programmed to a target destination -- Southend.  Zoom zoom and I looked at each other and we could not believe the speed we were going.  It felt like we were cycling at 200 kph and this was supposed to be a 16kph amble. My fear heightened for I was sure I will not last the rest of the night at this speed.


It felt good, although I was breathless.  Not because I was tired, it was because I can't get over the most magical atmosphere I was experiencing.  But it was not magic, it was real.  The Buckingham Place, The Hyde Park, The Mall -- my play ground for the night !  How good is that!  This is where Brompton will hold the 2015 Brompton World Champs.  I am now beginning to understand why they will hold the event in this venue at all cost, even at the cost of alienating their most loyal early customers by cutting the number of participating riders via a ballot.

Zoom zoom was all smile for he knew that it is a privilege to be cycling with this group of "hardcore" riders of LBC. The line up was unbelievable.  In no particular order were the super star Geoff Snell; the kings of the mountain, Mark Woolard, Orange Brompton and Christian; the Parisian girls, not because they are from Paris but because they have cycled from London to Paris, Samantha Skye and Jenny Hung; the torpedo girl Anne Marshall;  the front runners Tony Dele and Sleebus Jones and the undisputed Master of Rides and our leader David Parkinson.  Wooo...I am exhausted already just naming them. Of course, yours truly is very grateful just to be associated with these great names.

I was particularly happy to see Brian Bowditch, one of the super stars of the club.  I never really had any chance yet to chat with Brian but I know he is good at needle works.  He sewed his own bag, a bike bag,  made of leather.  I wish I am good at needle work too for I have a curtain in my bedroom that needs fixing. He is a nice bloke.

To me, he is a picture of happiness whichever angle you look at him.  I don't know if it is because of his body contours or his natural smiling face.  Even his rear seems to be smiling as his top shirt desperately tries to narrow the 5 and a half inches gap to his jeans. At one point I thought it was full moon until I realized the moon should be above not in front of me.

It was not until we crossed M25 when the lights of the city fade out. We cycled along so many interesting streets, residential and commercial roads, narrow alleys and beside wide motorways and bike path of all descriptions.  Sometimes, as it was getting darker, we found ourselves in someone's back yard.  At one point we ended up on a train platform as we tried to access an unlit bike/pedestrian bridge.  Bike signs in some areas are microscopic if not lacking at all.  Had it not for the brilliance of our navigator David, we would probably ended up back to London without even knowing it.

After over 2 hours, we reached Thurrock 24 hours Motorway Service.  It was a perfect timing as it begun to rain.  This was where we recharged.  It was a welcome break.  I was not really tired or hungry but I had an egg sandwich.  I always look forward to coffee breaks.  This is when we chat about all sorts of things. The trouble though after a coffee break was that I felt too comfortable to continue on with the ride.


The rain had stopped a bit and we carried on with our ride.  It was getting colder though, so I added one more layer of light waterproof over jacket, though after just few kilometers I have to remove it again.

It was becoming more and more rural as we head towards the sea.  We rode along some stunning country roads.  The sound of silence was intoxicating.  The sounds of pedals, gear changing, tyres rolling and the occasional echo of danger warning --  hole, hole, and more holes, coming from the front and rear of the peloton became all but music to my ear.  The flashing rear lights were mesmerizing though I dare not fall asleep as I was overwhelmed by the whole scene.

It was fantastic.  It was wonderland.  It was a pleasant disorienting and hallucinating atmosphere. It was surreal.  It was out of this world.  I was over the moon. I guess one can not really describe what a midnight ride is until one experience it.

As we reached closer to the sea, darkness fought helplessly with the new dawn and it was beautiful.  Slowly, more movements were becoming apparent.

We reached the sea.  Hallelujah !!! It was a mix of relief and jubilation for me.  Relief because my legs were wanting some rest.  Jubilation because I made it.  I was so proud of myself being able to cycle this distance.

We rode more along the sea front of Southend with a singular aim of reaching Toby Carvery along Thorpe Bay for promise of real good English breakfast. 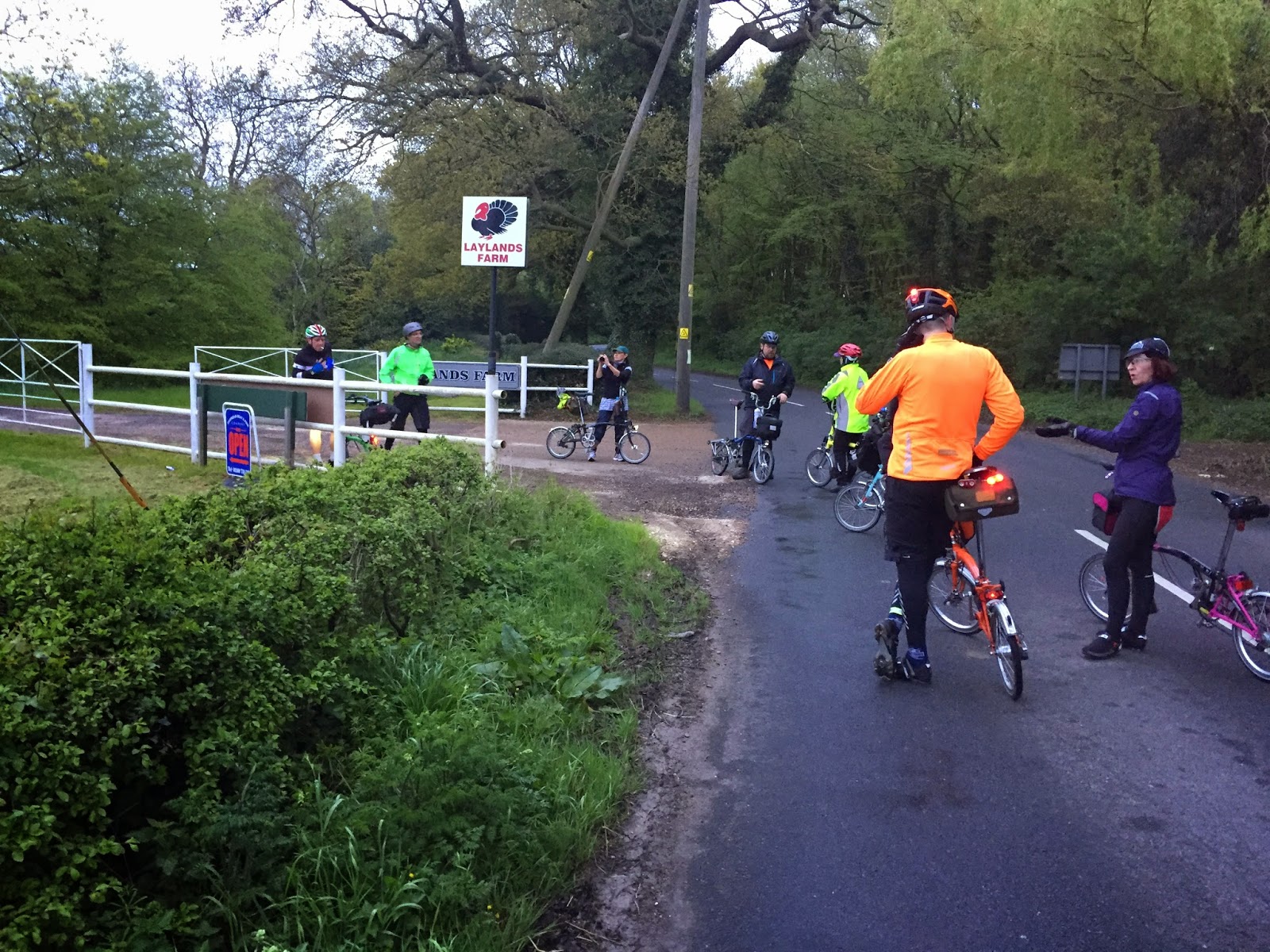 Along the Promenade was Geoff's brother welcoming us to Southend and joining us for breakfast.  Tony Dele and Orange Brompton thought the £3.99 all you can eat breakfast is too cheap to be nice, so they did not join us.  They headed straight to the train station.  We dumped Brian at one of the bus stop as a punishment for torturing his rear wheel and Anne Marshall took a precautionary measure to avoid doing more harm to her knee.  She bid us goodbye few kilometers before we reached the sea.


The rest of us headed to the restaurant for a well deserved breakfast.  Oh it was wonderful.  I stuffed myself with bacon and egg.  Geoff rewarded us with little lollies for getting to the finish line.  We had a laugh as we recap the night's ride. After breakfast we all headed to the train station for a return journey to London.

I arrived home feeling happy, proud of myself and accomplished.

It was truly a very memorable ride.  It was my first 100 kilometer, my first midnight ride to the coast and my first time at Southend.  It was a big challenge for me.  I enjoyed every minute of it to the point that sometimes I probably looked like an anti social as I hardly converse during the ride.  It was because I was fully savoring the mystical atmosphere and enthusiastically anticipating what is next to come at every turn of the pedal.


A big thank you to everyone in the group.  I would not have made the 100 kilometers without your company.  Thank you once again to David for leading and keeping the group together and for designing the fantastic and supremely interesting route.  Without you this ride would have not become a reality.  Thanks too to Geoff for being a tail end Charlie.

I hope there will be more midnight rides in the near future.

Then, my big question will be --Midnight ?  Why not ?
Posted by Zoomzoom Brompton at 02:58 No comments: